Nelson Engineering is honored to have been involved with the fabrication of an engine cowl that will eventually grace the FM-1/F4F-4 Wildcat in the Smithsonian Air and Space Museum. This precise replica was hand spun to the specifications dictated in the original 1941 blueprints.  Completion of the cowl will be performed by the expert warbird restorers at Goss Hawk Unlimited in Casa Grande Arizona.

Although often outclassed by faster and more maneuverable aircraft, the Grumman designed Wildcat performed valiantly in the hands of some of WWII’s bravest Navy and Marine pilots.  Medal of Honor recipients Butch O’Hare (the namesake of Chicago’s O’Hare airport) and Joe Foss (The highest scoring US Marine ace in US History) both received the US Military’s highest recognition for their victories flying the Wildcat.

As a tribute, a second cowl was produced and will be painted in the colors of Joe Foss’s aircraft flown in combat at Guadalcanal and displayed in our facilities.

Nelson Engineering would like to thank 2nd Ave Scooters for their donation of paint and labor to complete this tribute. 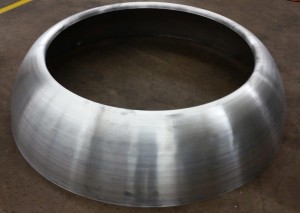